In many bat species, distress calls of trapped individuals provoke approaching behavior of conspecifics. Approaches are often interpreted as ‘inspection flights’, that are performed to gain information about the situation or predator (informational hypothesis). However, experimental evidence is scarce. If bats perform approaches to gain information, they should learn to fear objects (i.e. artificial predators) that are presented together with playbacks of conspecifics’ distress calls.

Distress call sequence of G. soricina. The sound file was slowed down by a factor of 10:

Isolation calls of a G. soricina pup. The sound file was slowed down by a factor of 10: 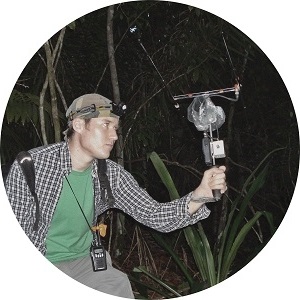